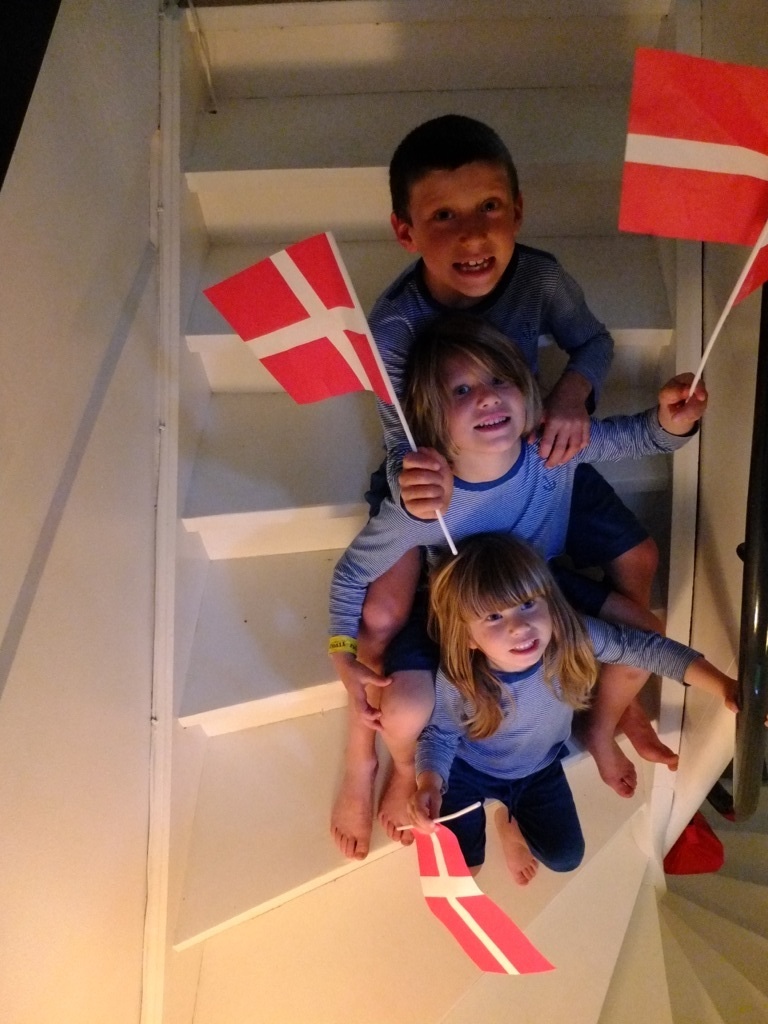 We have been meaning to finally send an update.
First, the Denmark chapter is over, so we thought we might post a new album (Gallery > Denmark).

We definetely have had a good time there. We will be coming back, maybe for a tour around Teltpladsen, we really liked that, but didn’t have the opportunity to test the sheds.
Here’s a short list of other thing we really enjoyed in Denmark:

– “Hej, Hej”: Everybody was just so friendly. It’s really nice to be greeted (“Hej,Hej”) by nearly all bypassers.
– Rybrød: Rye bread, white bread, wholemeal bread, Kanelsegl. Wow, Jonathan had nearly (but not quite) forgotten how good the bread is in Denmark. And, oh, what a relief to get good bread after nearly a week in The Netherlands where all you get is mushy-mushy, soft tasteless bread (Though Holland does have quite a few other things to enjoy)
– Milk, Yoghurt & Tilsit: Fresh milk, exellent dairy products, what a joy
– Copenhagen bicycle city: Wow, tricycles (Jernhest, Bullit, Christiania, Nihola), workcycles (Omnium), city bikes (Avenue), singlespeeds even “Eco” bikes (Eco2Bike) and the cycling experience was really good too. Funnily, there are about as many cyclists as in any other town in the Netherlands, but it just feels different. More easy going, less get-out-of-my-way from other cyclists. And so much faster: cyclists zip round the city… The postmen had, of course, their own cargo tricycles. 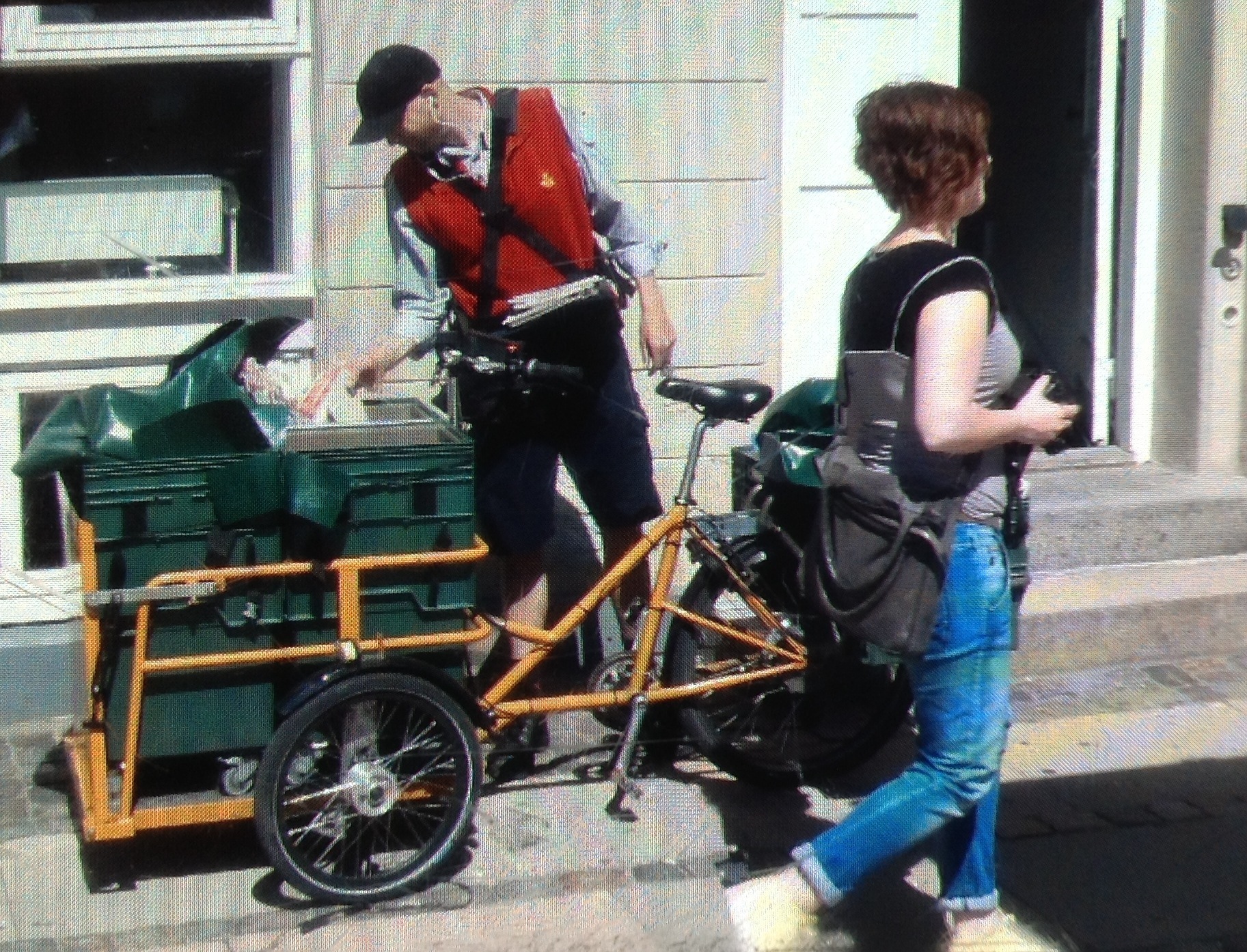 -The thing I like most being abroad is just going to the supermarket and see what kind of products they have or have not. Organic food is really integrated in Denmark, we didn’t find specific organic shops as we have but you can find a lot of organic food in the supermarkets. What was striking was the (not-organic, ha!) candy in the supermarkets, even the smallest supermarket had a really big rayon of candy and always a self-service with candy. (On the other hand, only few places we’ve visited had any kind of recycling scheme.)

-Flag (and flag pole)-dealers aren’t about to be out of business soon. Danish flags are up and flying everywhere! Every self-respecting Dane should have one in the garden (should I put up a small flag in Brussels?). For birthdays and special occasions they’ll hoist a bigger flag, but only between sunrise and sunset. Miro and Smilla got to up the flag at Jonathan’s uncle Peter. 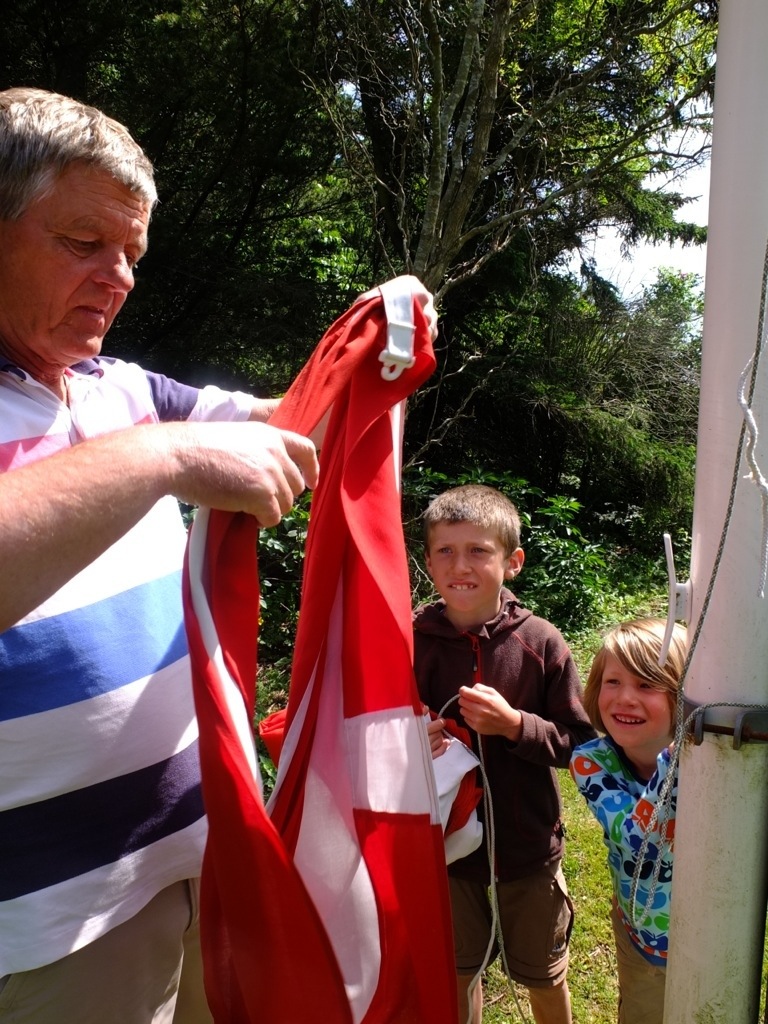 -Youth hostels are another thing to remember. We really enjoyed staying at them in Denmark (they are of course called Danhostels) besides the camping. And always a nice breakfast, but why are they mostly on top of the hill? The name of the Ebletoft Danhostel subtitle says it all: KOM PÅ TOPPEN!

-The cycling was really good, often on seperate cycling paths and really big ones. When we did ride on the roads, motorists were (nearly) always very careful and friendly. 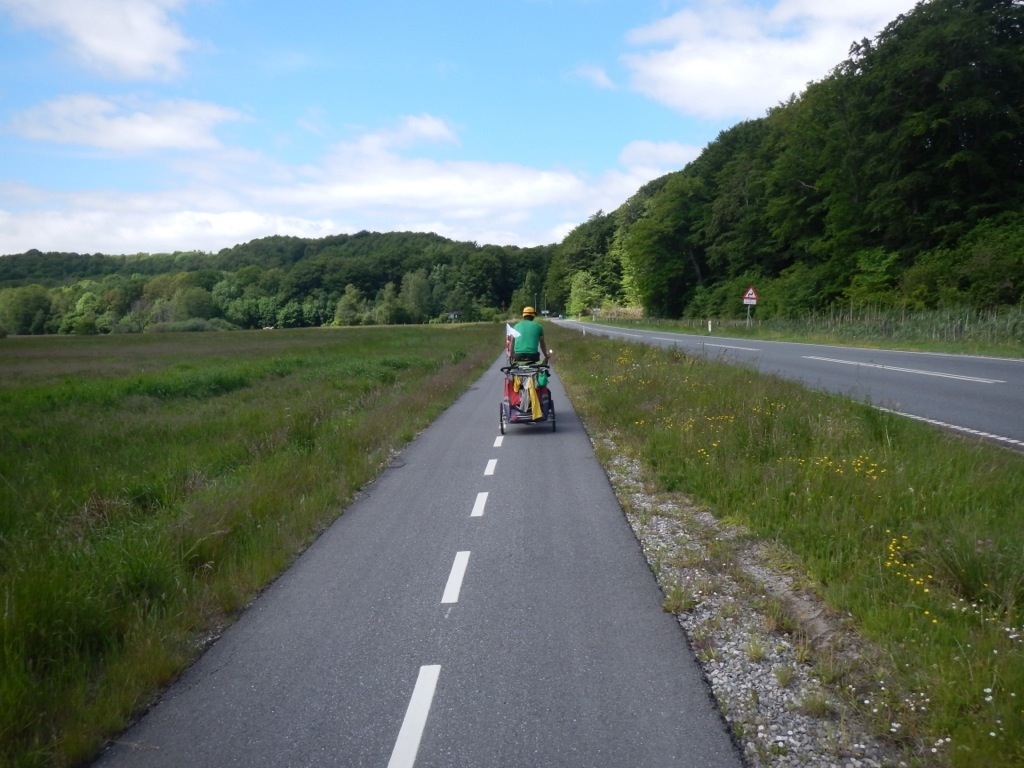 The highest point in Denmark is only 100-something meters, but don’t be fooled: Denmark is not flat. Always gently undulating, but steep enough to have a hard time on heavily loaded cycles. Our average speed dropped from 13-14 km/h in Belgium-Netherlands to 11-12 km/h.

One of the memorable rides was a 4 km stretch of beach we rode in stormy weather, luckily tail-winded all the way. Later that day Smilla fell asleep on the Pino for the last half hour. 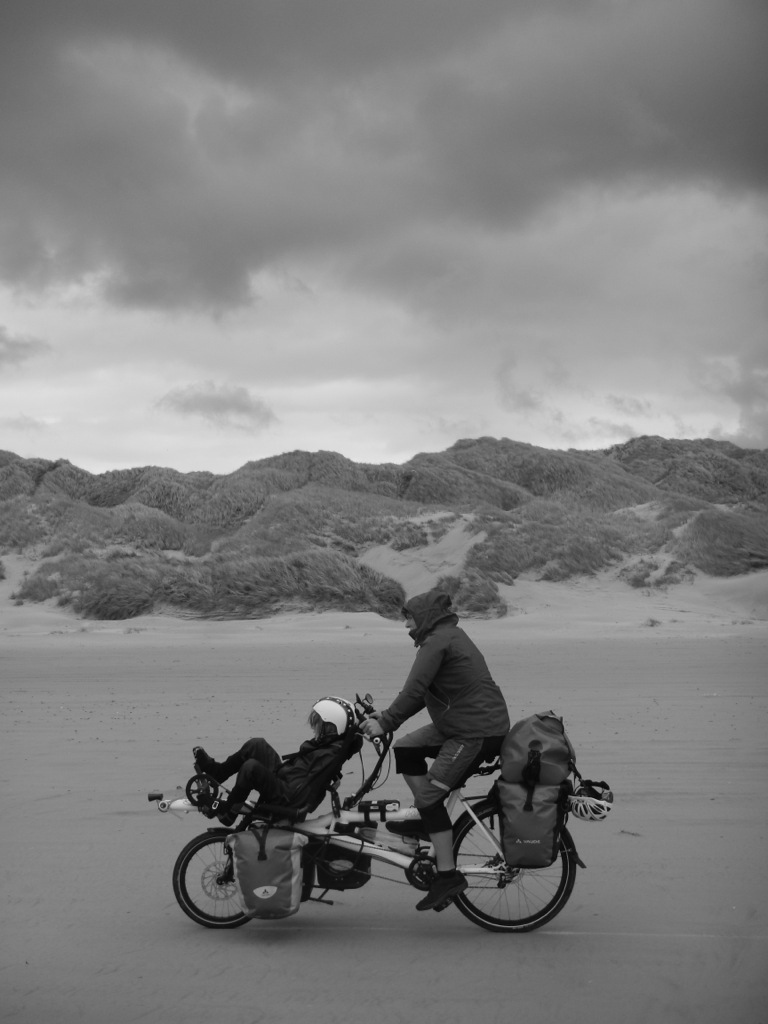 And of course, it was wonderfull to see part of our family again after so long time!